Worry wart: how to treat a wart 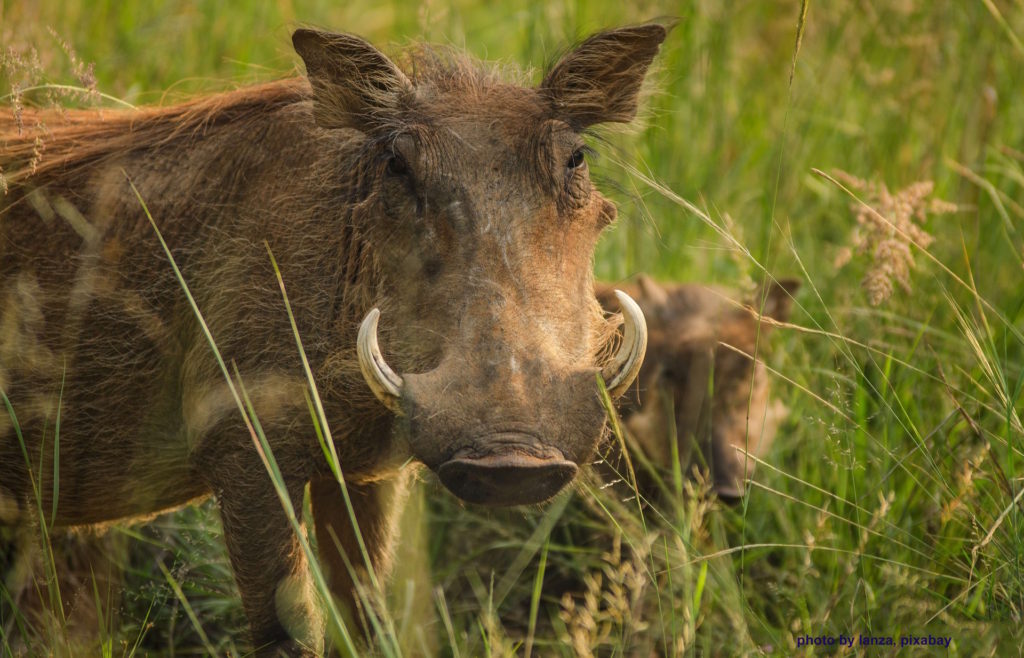 Nope, warthogs don’t actually have warts. But kids often do!

Emma’s dad and I both peered at the filamentous growth dangling from his nine year old’s right nostril.  “Yes,” I said, “it’s definitely a wart.”

Emma’s dad offered, “When I was a kid, I heard the way to get rid of a wart was to cut a potato in half, rub it on the wart, and bury the potato in the backyard. Legend had it, by the time the potato disintegrates, the wart will be gone.”

Warts are caused by skin-dwelling viruses. On the feet, warts can sometimes be mistaken for calluses.  One distinguishing feature is that warts sit in the skin like this: 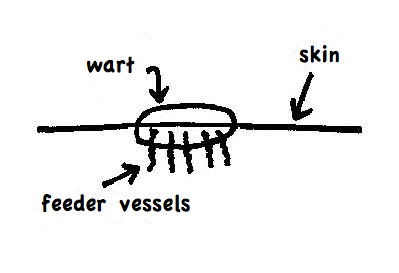 Fine “feeder” blood vessels extend from the wart into the skin. Therefore, if you scrape off the top layer of a wart, a dotted pattern usually appears from above. The dots will not appear in a callus. View from above:

There are simply no glamorous ways to get rid of warts. Most treatment modalities destroy warts by pulverizing the home they live in, a.k.a. your skin. Your doctor may be armed with various agents such as liquid nitrogen or dimethyl ether propane, which produces a chemical “freeze” and dries up the wart. Another agent called cantharidin (otherwise known as “beetle juice”) is a caustic liquid derived from the blister beetle. Application of beetle juice causes the warts to blister.

Some doctors will even manually take a scalpel and cut out the warts.

Like I said, there are no glamorous treatments. However, more gentle creams which stimulate the immune system, such as Imiquimod (Aldara) show some promise in children. Other compounds such as 5-fluorouracil can be topically applied or injected and treatments such as pulsed dye laser therapy have mixed reviews.

Over-the-counter remedies exist in a milder form.  Commonly used wart removers such as Compound W, Dr Scholl’s Clear Away Wart, and Duofilm all contain salicylic acid.  The acid slowly dries up the warts.  When applying salicylic acid, after a few applications make sure you peel the dead crusty top layer off  the wart. Without peeling, future medicine will not reach the wart.  These methods can take weeks to months to work, but they do work.

And don’t forget the duct tape.  Duct tape, the great all-purpose household item, has also been shown to speed up the resolution of warts. Scientists hypothesize the constant presence of the adhesive somehow stimulates a natural immune response.  If you try duct tape, have your child wear the duct tape over the wart for several days in a row and then give a day off. If the wart is on a hand or foot, the tape tends to fall off during the day: just re-apply some tape at bedtime. Effects should be seen within a couple of months if not sooner. Now, the original study that showed duct tape was helpful, was followed by a study which showed duct tape was not helpful. Some hypothesize that the results differ because silver sticky duct tape was used in the initial study, while the later study used less sticky duct tape. So be sure to use the old-fashioned silver duct tape.

The prevention of warts is tricky.  Some people just seem genetically predisposed.  However, your best bet for keeping warts away is to keep your child’s skin as healthy as possible.  Warts tend to gravitate towards areas of skin broken down by friction such as feet or fingers. Liberally apply moisturizing creams daily to prone areas.  After a summer of wearing flip-flops and walking on the rough cement by the side of a swimming pool in bare feet, many children end up with warts on the bottom of their feet.  I know a teen whose warts on the tips of her fingers stemmed from months of guitar strumming.

Turns out that even without treatment, 60% percent or more of all warts will disappear spontaneously within two years.

Coincidentally, I think that’s also the time it takes for a potato half to disintegrate.

A shred of advice: how to remove splinters