Itching to know: how to treat poison ivy 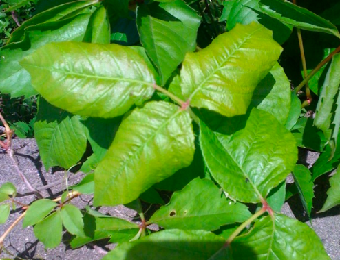 Teach your child to recognize poison ivy: “leaves of three, let’em be!”

Recently we’ve had a parade of itchy children troop through our office.  The culprit: poison ivy.

Myth buster: Fortunately, poison ivy is NOT contagious. You can catch poison ivy ONLY from the plant, not from another person.

Another myth buster: You can not spread poison ivy on yourself through scratching.  However, where  the poison (oil) has touched  your skin, your skin can show a delayed reaction- sometimes up to two weeks later.  Different  areas of skin can react at different times, thus giving the illusion of a spreading rash.

Some home remedies for the itch:

Hopping into the shower and rinsing off within fifteen minutes of exposure can curtail the reaction.  Warning, a bath immediately after exposure may cause the oils to simply swirl around the bathtub and touch new places on your child.

Hydrocortisone 1%-  This is a mild topical steroid which decreases inflammation.  We suggest the ointment- more staying power and unlike the cream will not sting on open areas, use up to four times a day

Calamine lotion – a.k.a. the pink stuff- This is an active ingredient in many of the combination creams.  Apply as many times as you like.

Diphenhydramine (brand name Benadryl)- take orally up to every six hours. If this makes your child too sleepy, once a day Cetirizine (brand name Zyrtec) also has very good anti-itch properties.

Oatmeal baths – Crush oatmeal, place in old hosiery, tie it off and float in the bathtub- this will prevent oat meal from clogging up your bath tub. Alternatively buy the commercial ones (e.g. Aveeno)

The biggest worry with poison ivy rashes is the chance of infection.  Just like with an itchy insect bite, with each scratch, your child is possibly introducing  infection into an open wound.  Unfortunately, it is sometimes difficult to tell the difference between an allergic reaction to poison ivy and an infection.  Both are red, both can be warm, both can be swollen.

However, infections cause pain – if there is pain associated with a poison ivy rash, think infection.  Allergic reactions cause itchiness- if there is itchiness associated with a rash, think allergic reaction.  Because it usually takes time for an infection to “settle in,” an infection will not occur immediately after an exposure to poison ivy.  Infection usually occurs on the 2nd or 3rd day of scratching.  If you have any concerns take your child to her doctor.

Generally, any poison ivy rash which is in the area of the eye or genitals (difficult to apply topical remedies), appears infected, or is just plain making your child miserable needs medical attention.

When all else fails, comfort yourself with this statistic: up to 85% of people are allergic to poison ivy.  If misery loves company, your child certainly has company.