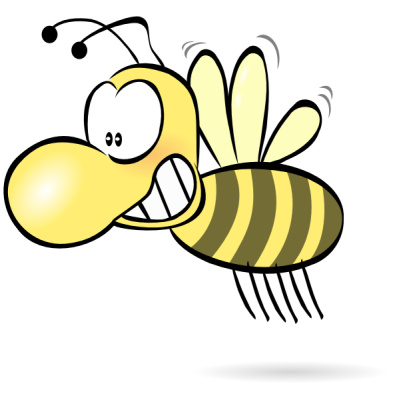 Ouch! Stung on the scalp.

Ouch! Stung on the hand.

Ouch! Stung on the leg.

Those nasty, nasty wasps. During the hot days of August, they become more and more territorial and attack anything near their nests. Today, in my yard, wasps mercilessly chased and attacked a fourth grader named Dan.

As everyone knows, you’d rather have something happen to yourself than have something negative happen to a child who is under your watch. As I had rolled out the Slip and Slide, I was relieved not to see any wasps hovering above nests buried in the lawn. I was also falsely reassured by the fact that our lawn had been recently mowed. I reasoned that anything lurking would have already attacked a lawn mower. Unfortunately, I failed to see the basketball sized grey wasp nest dangling insidiously above our heads in a tree. So, when a wayward ball shook the tree, the wasps found Dan.

What will you do in the same situation?

Assess the airway– signs of impending airway compromise include hoarseness, wheezing (whistle like sounds on inhalation or expiration), difficulty swallowing, and inability to talk. Ask if the child feels swelling, itchiness or burning (like hot peppers) in his or her mouth/throat. Watch for labored breathing. If you see the child’s ribs jut out with each breath, the child is struggling to pull air into his/her body. If you have Epinephrine (Epi-Pen or Auvi-Q) inject immediately- if you have to, you can inject through clothing. Call 911 immediately.

Calm the panic– being chased by a wasp is frightening and the child is more agitated over the disruption to his/her sense of security than over the pain of the sting. Use pain control /self calming techniques such as having the child breath slowly in through the nose and out through the mouth. Distract the child by having them “squeeze out” the pain out by squeezing your hand.

If the child was stung by a honey bee, if seen, scrape the stinger out with your fingernail or a credit card. Removal of the stinger prevents any venom left in the stinger from entering the site. Some feel scraping, rather than squeezing or pulling a stinger with tweezers lessen the amount of poison excreted. However, one study suggests otherwise. Wasps do not leave their stingers behind. Hence the reason they can sting multiple times. (Confused about the difference between wasps, hornets and yellow jackets? Wasps are members of the family Vespidae, which includes yellow jackets, hornets and paper wasps.) Relieve pain by administering Ibuprofen (trade names Motrin or Advil) or Acetaminophen (trade name Tylenol).

As you would with any break in the skin, to prevent infection, wash the affected areas with mild soap and water.

Soothe the area by spreading on calamine lotion or by applying a topical steroid like hydrocortisone 1%.

Even if the child’s airway is okay, if the child is particularly swollen, or has numerous bites, a pediatrician may elect to add oral steroids to a child’s treatment

It is almost midnight as I write this blog post. Now that I know all of my kids are safely tucked in their beds, and I know that Dan is fine, I turn my mind to one final matter: Wasps beware – I know that at night you return to your nest. My husband is going outside now with a can of insecticide. Never, never mess with the mother bear…at least on my watch.

How to tell your kids someone they love is dying

Driving to distraction: cell phones and our teens

Myth: butter’s better on a burn