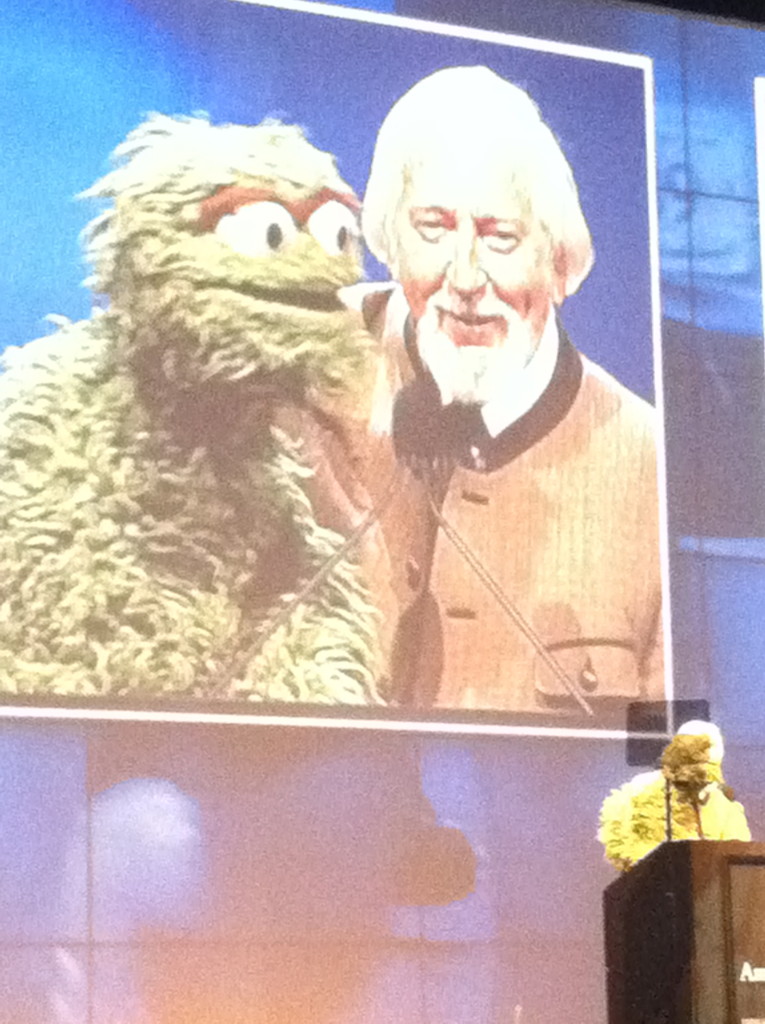 Today, as Two Peds in a Pod turns six years old, we think about our favorite six-year-old, Big Bird.

A friend sent me this link to an interview with Caroll Spinney on NPR. Now 81 years old, Caroll Spinney has played Big Bird on Sesame Street since the show first aired in 1969. According to the puppeteer, Big Bird has always been six years old.

Spinney wanted Big Bird to forever bubble over with the curiosity and enthusiasm for  learning which characterize a six year old’s development. In kindergarten or first grade, a six-year-old rapidly gains new skills. They learn how to read at this age if not earlier.

They like to belong to a group and feel included.

Sit in the back of a first grade classroom and listen to the class have a conversation. The teacher may ask the kids, “Who has ever been to the ocean?” and watch all the hands go up. As she calls on each child to tell his story about going to the beach, some kids tell about their beach vacations, some talk about which relative or friend they visited at the beach, and at least one six-year-old will say “I never saw the ocean, but I have a dog!” because they want so desperately to belong to the conversation.

As part of their interest in others, they will join sports teams, scouts, begin religious school or specialized language schools.

Although they may seem interested in everything, be careful not to over schedule. This might be the first year of “all day” school, and even a child who attended an all day childcare or kindergarten can tire out after a full day of learning. Also, as part of their interest in group participation, children may start to form “clubs” as they play. To ward off future bullying, teach your child,” You can’t be friends with everyone. You just have to be nice.”

Six-year-olds still have a great sense of wonder and imagination.

They believe in Santa Claus and the Tooth Fairy. They also are interested in science and nature, planets and dinosaurs, and how things work. They can simultaneously believe in the very real and concrete and believe in magic.

And they are not shy about it: Why do I have to go to bed? Why does that man have only one leg? Why do helium balloons float? Why do people die? Sometimes the “Why’s” can lead into  whining, but luckily, six-year-olds can be easily distracted out of their perceived injustices.

Kids at this age tend to concern themselves with body integrity

They may cry over a relatively minor injury such as a paper cut or skinned knee. If you want attention from a room full of six-year-olds, put a Band-Aid on your arm and they will all ask, ” Why do you have a Band-Aid?”

We are excited that Two Peds in a Pod® turns six today. Like Big Bird, we hope to forever ask “Why,” as well as “How?” and “When?”  May your children continue to inspire a sense of wonder and curiosity in your lives, whether they are six months, six years, sixteen, or sixty!

How can I motivate my child in school? — Creating the resilient learner

A shred of advice: how to remove splinters