The best cold medications for children? For kids over one year of age, the Honey Bear offers grrr-eat relief

So many children (and their parents) have colds now. Are you staring at the medicine display in the pharmacy, wondering which of the many cold medicines on the shelf will best help your ill child? How we wish we had a terrific medication recommendation for  treatment of a kid’s cold. Unfortunately, we do not.

The safety and effectiveness of cough and cold medicine has never been fully demonstrated in children.  In fact, in 2007 an advisory panel including American Academy of Pediatrics physicians, Poison Control representatives, and Baltimore Department of Public Health representatives recommended to the U.S. Food and Drug Administration (FDA) to stop use of cold and cough medications under six years of age.

Thousands of  children under twelve years of age go to emergency rooms each year after over dosing on cough and cold medicines according to a 2008 study in Pediatrics . Having these medicines around the house increases the chances of accidental overdosing. Cold medications do not kill germs and will not help your child get better faster. Between 1985 and 2007, six studies showed cold medications didn’t have significant effect over placebo. 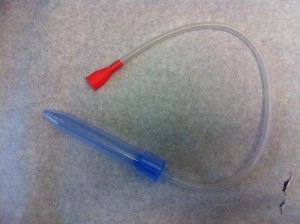 So why are children’s cough and cold medicines still around? A year after the advisory panel published their recommendations, FDA advised  against using these medications in children younger than two years but data about these medications in older children is still rolling in.   FDA continues to advise caution with these medications. The producers of cold medicines said at that point they would launch new studies on the safety of medication for those two to twelve years of age. In the meantime pharmaceutical companies stopped manufacturing cold medicine products for those under two years of age and changed the labels to read “for four years old and above.”

Yes, watching your child suffer from a cold is tough. But why give something that doesn’t help her get better and has potential side effects? Don’t despair, even if you can’t kill a cold virus, there are plenty of things you can do to make your child feel better. If she has a sore throat, sore nose, headache, or body aches, consider giving acetaminophen or ibuprofen to treat the discomfort. Give honey for her cough  if she is over one year of age. Run a cool mist humidifier in her bedroom, use saline nose spray or washes, have her take a soothing, steamy shower, and teach her how to blow her nose. Break up that mucus by hydrating her well — give her a bit more than she normally drinks. For infants, help them blow their noses by using a bulb suction. However, be careful, over-zealous suctioning can lead to a torn-up nose and an overlying bacterial infection. Use a bulb suction only a few times a day.

Best of all, when your kids have a cold, unlike you, they can take as many naps as they want.

Ear wax in your child: what to do with the goo