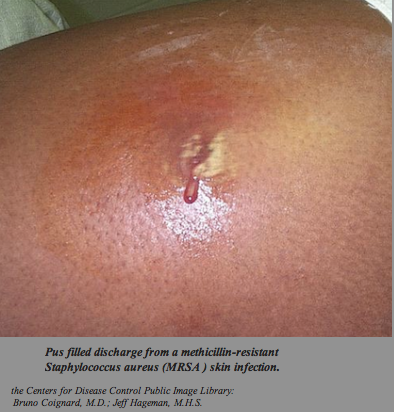 Today our guest blogger, infectious disease specialist Dr. Amanda Paschke, shares her expertise about an increasingly diagnosed infection that is mostly “skin deep” but occasionally can be more serious — Drs. Kardos and Lai

If you watch television you have probably heard of MRSA. MRSA, or methicillin-resistant Staphylococcus aureus, is a bacterial strain that has become quite famous – rightly or wrongly depending on the context. In this post, I will share a pediatric infectious diseases specialist’s perspective on the fact and fiction surrounding this germ.

MRSA is a particular subtype of Staph aureus bacteria. Staph aureus is everywhere and many people are “colonized” with Staph aureus. In other words, the bacteria live happily on our skin with all the other bacteria, minding their own business. Sometimes, if a person is colonized with Staph aureus, and there is a break in the skin from a cut or other injury, the Staph aureus can cause an infection. This can happen even if a person is not colonized with Staph aureus, because the bacteria are everywhere – in the environment on surfaces, on other people, etc. On people, Staph aureus like to live in the nose and other warm moist places like the armpits and groin area. MRSA is just like regular Staph aureus in where it lives and how it spreads – the major difference between the two is that the antibiotic choices for treating an infection caused by MRSA are more limited because MRSA is resistant to more antibiotics.

No. In the Philadelphia area where I trained, at least half of skin infections tested are caused by MRSA. In other words, a child having a MRSA skin infection is not a unique event for a community. MRSA is more prevalent than most people realize. In addition to colonization, which you would never know from just looking at someone, many people have minor skin infections for which they never see their doctors because the infection comes and goes on its own with no treatment, or maybe with a little antibiotic ointment. Because samples from these infections are not tested for bacteria, we will never know what caused them and many could be caused by MRSA.

Rarely, a child can have a severe illness as a result of MRSA. This does happen, and appears to be happening more frequently now compared with 10 or 20 years ago, but far more common are simple skin infections caused by MRSA, and the vast majority of these do not progress to serious illnesses.

My grandmother was in a nursing home and died of MRSA. Now my child’s friend had a skin infection caused by MRSA – is this the same thing?

My child was diagnosed with a MRSA skin infection. Will it happen again?

Maybe. If you’ve been told your child has MRSA, don’t panic! In many cases, a single infection caused by MRSA is a one-time occurrence. Some children have recurrent infections with MRSA, but this is far more likely to be an annoyance and inconvenience rather than a serious illness. Recurrent MRSA infections can occur for a period of time, and then not happen again. Some of the time, changes in hygiene practices can stop the cycle of recurrent infection. If your child has recurrent infections, ask your doctor for more information about strategies to try. One important thing to keep in mind is that having MRSA, and even having recurrent MRSA infections, does not mean something is wrong with your child or her immune system – it is just bad luck.

Does someone have MRSA forever?

Maybe, but probably not. As I mentioned above, a significant proportion of the population is colonized with MRSA. The bacteria that colonize our bodies change over time due to a variety of factors, like age, antibiotic use, and environmental exposures. A person could be colonized with MRSA for a period of time, and then never again or not again for years.

Should the school be closed and decontaminated if there is a child with a MRSA infection?

No. Schools should be cleaned as they normally are to reduce bacteria and viruses on surfaces. MRSA and other Staph aureus predominantly live on people, in the nose and other moist body areas, so unless people are decontaminated (not advised!) MRSA can’t be eliminated.

Should kids with MRSA be excluded from school?

Absolutely not. For every one child with a diagnosed MRSA infection there are many more who are colonized with the bacteria, so it does not make sense to exclude a child on the basis of a diagnosis. A child with a MRSA skin infection is not a danger to other children or adults. As with any skin infection, open wounds should be covered. MRSA, while it can in some cases be more harmful than regular Staph aureus, is not any more contagious than regular Staph aureus. A much better strategy than exclusion is to teach children to wash their hands well and to avoid nose-picking, as these interventions will protect them against hundreds of diseases.

Can my child play with his friend who has MRSA?

Yes! As discussed above, a MRSA diagnosis does not say anything about a person’s overall health or make them more likely to transmit disease. Also, your child could very well be colonized with MRSA too and you wouldn’t know it. The best way to prevent the spread of MRSA is to encourage routine hand washing and to discourage nose-picking. Also, avoid sharing towels and sharing sports equipment that rubs against the skin, such as soccer shin guards and football pads. Remember, your child is much more likely to catch a cold or stomach virus from a friend than they are to catch a MRSA infection.

Dr. Paschke is a board-certified pediatrician and pediatric infectious disease specialist. A mother of two, she trained at the Children’s Hospital of Philadelphia and is currently conducting clinical research in the pharmaceutical industry.

It’s a tough pill to swallow

The building blocks of learning