The dirt on tetanus 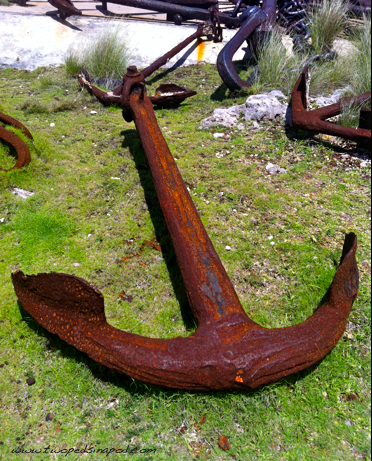 fodder for tetanus…don’t get this stuck under your foot

Look at this old rusty old anchor atop an old fort. Rust plus dirt equals a perfect breeding ground for tetanus. As my kids scampered between different anchors last week, I quickly calculated in my mind whether their preventative tetanus shots were up to date.

“Getting the tetanus shot” is part of the American societal childhood rite of passage, but most people don’t know much about why their kids are vaccinated. Everyone knows they want to avoid IT, but what is IT? Because it is somewhat rare in the United States, I still remember asking one dad about his child’s family history. I was startled when he erupted onto peals of laughter after he told me the child’s grandfather had died of tetanus. “Why are you laughing?” I said in disbelief.

“You’re right, it’s not funny… It’s just the look on your face is funny,” he said. “Everyone has the same shocked expression when I tell them that he died from tetanus.”

Also known as Lock Jaw, tetanus is an organism which thrives in places with little oxygen. Thus, it tends to live on rusty nails (and anchors!) and deep in dirt. Tetanus secretes a poison which causes muscles to spasm painfully and severely and also causes seizures. Exposed to tetanus, your jaw muscles clench into a sardonic smile which prevents eating – hence the name Lock Jaw. Eventually, the tetanus poison infiltrates the chest muscles that help you breathe, and if you are like nearly 40 percent of cases, you will stop breathing and eventually die.

We have no antidote for the poison of tetanus- but we do have a preventative immunization which causes our bodies to preemptively prepare antibodies as self-defense. At the time of a high risk injury, if needed, doctors will boost your child’s tetanus immunization. If your child is under- immunized, the doctor will also inject your child with tetanus antibodies (tetanus immunoglobulin) to further ensure that your child will not contract this disease.

Because tetanus thrives away from oxygen, it easily multiples in deep wounds contaminated by the germ. The germ surrounds us in soil and also lives in intestines of humans and animals. Since tetanus lives in dirt, the following are considered “high risk” injuries:

-Bites from animals which dig and “eat” dirt such as dogs.

-Wounds with embedded rocks and gravel.

Be wary of tetanus in wounds possibly contaminated with stool, dirt ,or saliva. In developing countries, there are continued cases of infantile tetanus because poultices of mud are used to take care of the umbilical cord stump of newborns.

For kids, the recommended ages for tetanus shots are at 2 months old, 4 months old, 6 months old, 15-18 months old, 4-6 years old, 11-12 years old, and then every ten years through adulthood. Note, if a high risk wound is sustained, the last shot should be within five years. Thus, a kid around 9 years old may be up-to-date for shots, but because he received a tetanus vaccine at four-years-old (on time) he will still need an immunization at the time of a risky injury. Watch out also if you have a teen. His pediatrician will immunize him at 11-12 years of age, but after 16-17 years old he will need a booster if he sustains a dirty wound.

Kids are expected to get dirty. Enjoy the dirt—just not the tetanus.