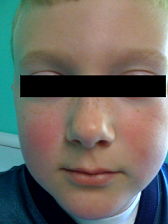 Eeek, you say to yourself when you see your child’s bright red cheeks. I forgot to apply enough sunscreen.  Other than the splash of color, however, your kid is acting fine and does not say his face hurts. You are perplexed…and it has been raining most of this week.

A day or two later, your child breaks out in a lacy, light pink rash mainly on his upper arms, thighs and chest.  So it’s NOT sunburn. It’s the common childhood illness Fifth’s disease. This illness, your child’s doctor tells you, was the fifth childhood rash to be classified. Also called Parvovirus, it won’t impact him very much. Occasionally there are mild cold symptoms, headache, or fever before the rash and the rash is not particularly itchy. Within a week the rash fades, but it can come and go for a few weeks. Sun, exercise and heat can bring out the rash. As a bonus, your child now has life-long immunity (protection) to the disease. You only get it once.

Pictured is the characteristic facial rash often described as “slapped cheeks.” Also pictured is the “lacy” rash on a child’s arm.

If the symptoms are mild, then why do we care about diagnosing Fifth’s disease?  If your child has certain types of chronic anemia, parvovirus can make the anemia much worse. But for most families, the impact of the disease is not on the child who catches it but on the child’s contacts.  If a pregnant woman contracts the disease, the disease can be lethal to the fetus.  Luckily, most women already contracted the disease in childhood and have immunity against the germ.  In adults who did not have the disease as a child, parvovirus can cause achy joints in the hands and feet. 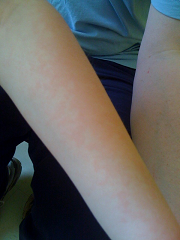 The tricky thing about preventing spread of fifth disease is that children are NO LONGER CONTAGEOUS once they have the rash. They expose others before parents realize their children are sick. The virus is spread through respiratory secretions and saliva-another reason to teach your children to wash their hands.

Again, if your child comes down with Fifth’s disease, remember to tell any pregnant contacts (teachers, friends’ moms, etc) so that they can let their obstetricians know about their exposure.

As a precaution when I was pregnant, my obstetrician checked my parvovirus immunity.  “Wow,” he said, “those are some of the highest levels of immunity I have seen.” When it comes to parvovirus, I suppose a history of being around sick kids can be good for you.

Gift Ideas by Ages as Well as Stages